This is a question we address again and again in the library – the tendency of some babies to want to grow eyes in the backs of their heads! Most common between 3-6 months, but can manifest anytime, it’s not confined to carried babies, and it can be constant. Any time you want your baby to feed, nuzzle down, or turn away from stimuli to settle them, they’re craning backwards, upside down and

sideways, wanting to know just what is going on! It is so very common to encounter issues with this that I’ve given it a name – NOSY (Not Only Seeing You) Syndrome.NOSY babies have generally just discovered that there is a world out there behind them, and they would very much like to be a part of it. It is often a factor in ‘turning babies around’ – whether in pushchairs, carrying in arms, or in carriers to assume a Front Facing Out position. But is this the best solution?It is important to consider exactly what your baby wants to see and why they want to see it. The constant that gives the baby the confidence and security to explore the world is you. Your NOSY baby needs to observe the world safely from that constant in the same way that they will later explore it without going too far from your side. Comedian Reid Faylor was joking when he said ‘I think Peekaboo is the cruelest game we play with children. This is because babies lack what is known as ‘object permanence’. So when when you close their eyes, they don’t know you still exist as a mother. The game should really be called it ‘Orphan; Not Orphan”. It’s a joke. But does it have some basis in truth?  Object permanence – the idea that something can still exist even when you can’t see it – this only develops between 8-12 months, with prime time for NOSY syndrome being 3-6 months. These young NOSY babies can literally lose sight of reality when faced away from a caregiver.

No-one is suggesting you stop playing peekaboo, or stop ‘turning babies around’ – for some NOSY babies it can be a decent short term option, when handled well, with understanding. But I suggest some other options, to allow your NOSY carried baby to see their world – and the axis on which it spins – you.

Some babies will only display signs of NOSY syndrome at certain times of day, or in certain situations – such as when they are sleepy, during the evenings, or when you put them in a carrier in a certain way – tucked in, for example, or with their arms in front of their faces. Experiment with times and methods, if you can, and bear in mind that babies object to most things – car seats, nappy changes, cuddles – now and again. Try not to dismiss your carrier out of hand. Keep calm and try again another day.

Many of the carriers we have in the library allow for height adjustment, especially wraps and mei tais. Giving babies a little more upper body freedom than they have been used to as a new baby with no head control is often all that is needed to stop the NOSY baby fidgets.

Carrying babies on the hip

Carrying babies on the hip is arguably the most natural position we assume. NOSY syndrome often co-incides with a baby establishing enough upper body strength and head control to be naturally carried on the hip when in arms. It seems natural that we support this position in a carrier as well. Many two shoulder carriers can be adapted to carry on the hip, babies can be

wrapped on the hip and there are many hip carry specialist carriers, from ring slings and pouches to structured hip carriers such as the Scootababy and Ellaroo Mei Hip. Babies carried in the hip can see not only you, but in front and behind – the ultimate for a happy NOSY baby. Importantly, if they need to turn away from the big, wonderful world, they can turn into your body and nuzzle down.

Carrying babies on the back 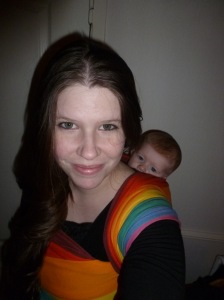 Carrying NOSY babies high on the back has many of the hip carry benefits. Up high and close to you, they can turn in and away or look up and out, forward facing in the truest sense but secure in your continued presence. Back carrying works best with smaller babies when they can be carried high, as in wraps or mei tais, and peek over your shoulder at everything you do. Carrying on the back sometimes takes practice and should only be attempted when you feel happy with the process.

Why not just ‘turn them around’?

You can do, of course, and with some babies, this is all that will suffice, temporarily. Perhaps your baby is one of these. If you feel that is so, and you have tried the other carrying positions above, let’s explore the guidelines around ‘back to front’ or ‘FFO – front facing out’ positioning.

Let’s imagine ourselves in the baby’s place. Firstly, it’s easy for us to imagine that we will feel more comfortable with a seated position, weight spread across buttocks and thighs, than we would sitting on a narrow seat supported only by the crotch – let’s compare a bucket seat to a bar stool. So in outward facing our baby we should be aiming for a similar position to when they face in, legs supported at at least a 90 degree angle from the torso. Some buckle carriers now offer this type of positioning, and in many other carriers it can be achieved with awareness of the issue and a supplementary hand if needed.

One of the arguments against facing out is that it flattens the infant spine, the tightening mechanism of the carrier pushing the baby into a prone position with the spine in an artificial S shape rather than the infant curve. We recommend being aware about over-tightening the carrier, to use the position for limited periods, and use carriers designed for this carrying position.

We know that overstimulation, an inability to turn away from the outside world, out of sight of a care giver, can be an issue for some babies when using FFO positioning. Buried deep in most carrier instruction manual you will find recommendations to use this carrying position for shorter periods of time than you might expect – some say ten minutes, fifteen minutes, twenty minutes. Some suggest building up to the longer periods of time as baby grows. So when trying your carrier, check how easy it is to switch your carrier between inward and outward facing. Too difficult a switch, and you can end up not using one or the other at all. Monitor your baby, and make the switch if they are finding the position over stimulating or becoming tired. Always use inward facing positioning for sleeping children.

The most common suggested age range for outward facing positioning is between 5-12 months of age. Some carriers suggest waiting for six months before using the position, or suggest developmental milestones such as sitting or sturdy head control. We know outward facing carrying requires a greater degree of upper body control for the child, so it’s important to follow the guidelines on lower age limits. Facing out very early or when sleeping can be a risk to airways, so it is extremely important to use it age appropriately. The upper age limit is usually for the sake of the parent. Carrying outward facing is a significantly increased weight loading to carrying inward facing as the child is further from your centre of gravity, no longer wrapped around you. They often feel and look taller when facing out, and can reach more things too, making it a less practical option for many scenarios as they grow. We know you want to share experiences with your baby, and the happy truth about the alternatives to facing out mentioned in this article is that they can all be used throughout toddlerhood, offering long term ergonomic carrying on the front, back and hip even when your facing out days are done.

There are issues, it is important to note, but once you are aware of these it is your choice to make. There are carriers which will support you in any position that you choose.

This Too Shall Pass

NOSY babies don’t always remain so, the majority will move on from the NOSY stage really quite quickly, although it can seem a long time when you can’t feed or carry your baby without the crazy craning! It is very likely that when this stage passes your baby will be happily carried on the front, or back, or hip. When the exploration stage begins, your baby’s NOSY tendencies can be fulfilled as they get down on the floor and exercise their own independence – often, when it is time to come back to you, to feed, sleep, travel or be close, the NOSY baby is more than ready to hunker down and snuggle in – to have a break from being a big clever baby, and go back to being a tucked-in snuggle bug. NOSY syndrome is a hurdle to be overcome, not an end to facing inward or baby carrying itself.

If you still have trouble with your NOSY baby, seek help from your local sling library or carrying resource. Here in West Yorkshire we provide carrying support to hundreds of families each month – click our venues to see where we are this week or send us a message using the contact us page.

With thanks to Sling Guide – The Baby Carrying Resource – By Parents for Parents – http://www.slingguide.co.uk